These days, customers expect shorter fulfilment timeframes and have a lower tolerance for late or incomplete deliveries. At the same time, supply chain leaders face growing costs and volatility. Process mining creates transparency and visibility across the supply chain and provides proposals for decisions with their trade-offs for real-time optimisation of flows. 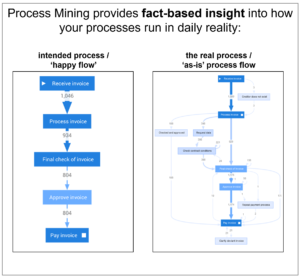 Instead of working with the designed process flow or the process flow that is depicted in the ERP system, process mining monitors the actual process at whatever granularity you want: end-2-end process, procure-2-pay, manufacturing, inventory management, accounts payable, for a specific type of product, supplier, customer, individual order, individual SKU. Process mining monitors compliance, conformance, cooperation between departments or between client, own departments and suppliers, etc.

Visibility across the supply chain

Dashboards are created to suit your requirements. These are flexible and can be easily altered whenever your needs change and/or bottlenecks shift. They create real-time insights into the process flow. At any time, you know, how much revenue is at stake because of inventory issues, what root-causes are and which decisions you can take and what their effects and trade-offs will be.

If supplier reliability is not at the target level at the highest reporting level, you can easily drill down in real-time to a specific supplier and a particular SKU to discover what is causing the problem in real-time. Suppliers could also be held to the best-practice service level of competitive suppliers.

The interactive reports highlight gaps between actual and target values and give details of the discrepancies, figure A. By clicking on one of the highlighted issues, you can assign an appropriate action to a specific person, figure B. Or it can even be done automatically when a discrepancy is detected. And direct communication with respect to the action is facilitated in real-time, figure C.

THIS INTERVIEW WAS PUBLISHED BY THE GUARDIAN